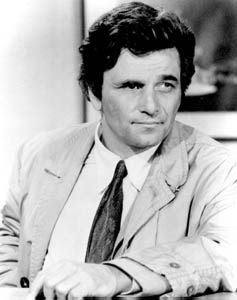 It’s sale season in France and I seized the occasion to finally acquire the complete Columbo series at a bargain price. The series was one of my first introductions to the mystery genre and remains a personal favorite despite, or thanks to, multiple viewings. What fascinates me most is how the show stayed fresh for most of its course while essentially telling the same story over and over again; only L&O in its prime managed the same feat. Formulaic it was, but intelligently so: modern executives take notice!

Also it was and remains quite an achievement to make an iconic figure out of a character about whom so little is actually known. His first name remains shrouded into mystery. He is the only source for information on his personal and family background and we can never be 100% sure whether what he says is true. For instance he incessantly talks about his wife but she never appears on screen, and it’s unclear whether they have kids; the only member of his family we ever meet is… his dog.

The most puzzling thing about Lieutenant Columbo, however, is his forever « underdog » status. How can a detective who tackles – and solves! – only high-profile cases remain such an obscure figure? In the course of his career Columbo sent senators, country singers, film stars, secret agents and the likes to jail and yet no one seems ever to have heard about his exploits – suspects keep taking him for a bumbling fool despite abundant past evidence that he isn’t. Rather implausible, but then implausibility often makes for great fiction as any mystery fan knows – and Columbo brilliantly testifies to that.