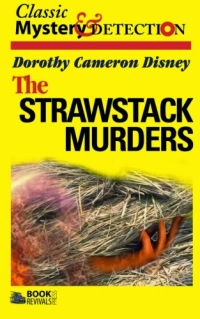 From the blurb of the Book Revivals edition of Dorothy Cameron Disney’s THE STRAWSTACK MURDERS which I received today (along with another book of hers, her first, Death in the Back Seat)

« Unlike many of the mystery stories of the time, STRAWSTACK avoids devices that may become annoying: There is no omniscient detective, no long, boring, repetitious interviews with servants, no scientific tests and experts, and, best of all, no complicated, confusing house or room plans. »

Promoting a Golden Age mystery by trashing Golden Age mysteries: Talk about inventive advertising. To think that what BR people deem « annoying » was once what made the genre popular – and unique! This tells us everything we need to know about the evolution of said genre over the last half century – some will say it was for the good, but it won’t come to you as a surprise that I’m not so sure. The late Milward Kennedy who was so fond of floor plans (a fondness that much amused John Dickson Carr) would surely be shocked to see that his pet device is now regarded as « complicated » and « confusing »!

P.S.: Has anyone read Cameron Disney’s book? I’ve read only two of her books, Thirty Days Hath September (co-written with George Sessions Perry) and her swan song, The Hangman’s Tree. I liked both enough to want to give her another look: well written, atmospheric, good characterization and competent plotting. I see she’s often associated with the HIBK school but I didn’t feel it when reading her – but then neither did I feel it when reading Mary Roberts Rinehart, the alleged founder and queen of that much-maligned subgenre.