Since there are strong chances that it ends being my Book of the Year, I’d like to say a few words about the most radical entry in the Puzzle series, the uncharacteristically dark Puzzle for Pilgrims. It is arguably the one hardest to like, especially if you are a puzzle purist, as the Quentins bid farewell to the traditional detective story with this one. French scholar Roland Lacourbe was probably representative of a lot of readers when he trashed it in his Patrick Quentin survey as poor in plot and having unlikeable characters with unbelievable motivations, but I think he missed the point entirely. 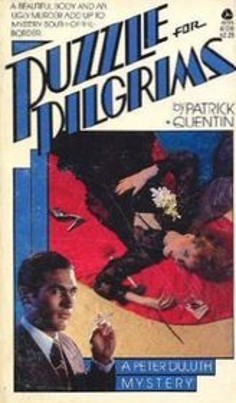 Each of the Puzzle books has the Quentins dabbling into a different crime fiction subgenre – and increasingly distancing themselves from orthodoxy. Puzzle for Pilgrims continues the breaking away from tradition that the previous book in the series, Puzzle for Fiends, had initiated, but takes it one step further. Fiends was arguably a Woolrich-like suspense novel whereas Pilgrims appears to aim at crossing over to mainstream fiction with only a nominal criminal element remaining. Pilgrims is the kind of crime novel B. Traven would have written had he tried his hand to it. The focus is not on the mystery – it’s not even sure there is one until very late – but on the characters and their drift to the bottom in a Mexico very far from its tourist-friendly image. This must have appeared revolutionary at the time, hence the Grand Prix de Littérature Policière that was bestowed on the book, and certainly unprecedented in the treatment of well-established series characters. The Norths or the Beresfords never got through something like this. Pilgrims is very much to the Duluths as The Long Goodbye is to Philip Marlowe, except that Chandler’s novel came out almost a decade later. The Quentins were ahead of their time with this book and perhaps they still are, explaining why even modern readers may have difficulty enjoying it – provided « enjoy » is the right word. Jean-Pierre Coursodon and Bertrand Tavernier in their 50 years of American Cinema wrote something to the effect that Kubrick’s movies are admirable but not likeable – the same nuance applies to Pilgrims; it is undeniably a masterpiece and perhaps the Quentins’s masterpiece but it is not one that can be read with unmitigated pleasure.

Curtis Evans, probably the leading contemporary expert on everything Quentin, has suggested that the series closely followed the evolution then devolution of the relationship between the two writers behind the byline, and there are strong evidence in favour of that thesis: There is no way you can write such a book without having actually been there and done that. One thing is for sure: Neither Quentin or « his » writing were the same after that. It is worth noticing that while Pilgrims is not the last of the Duluths it is still the last Puzzle book, with further Peter and Iris outings eschewing the word that had been the trademark of the series for a decade. Webb and Wheeler seem to have thought they had reached a point of no return with that book and perhaps intended it to be the last in the series. Whatever may be they never returned to the lightheartedness of the early entries in the Duluth canon.

The dream maybe wasn’t over yet – but the fun was.

6 commentaires sur “The Carnival is Over”