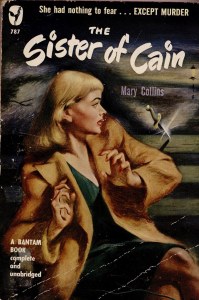 It is interesting, though not entirely surprising, that the same people who spent years and years deriding, ridiculing and overall dismissing the HIBK school as « feminine » fluff never tried to account for its success other than by more or less subtly impugning the intelligence of its readers. Surely those ladies – for they were all ladies, right? – had not to be that smart to favor Mary Roberts Rinehart and her many heiresses over the incomparably superior [insert your favourite contemporaneous crime writer’s name here]

« People are dumb » is not a sufficient, or even valid, explanation for success, no matter how dumbfounding it may be to outsiders. HIBK is no exception. Its many, many readers had to have reasons to come back to the genre again and again and the sole way to understand them is to read the books the way they did – that is, without prejudice. I’m currently reading Mary Collins’ 1944 novel The Sister of Cain and I think I’m getting to the beginning of an answer.

Collins’ book concerns itself, in typical gothic fashion, with a hapless war bride coming to live with her in-laws – all female – in a dark house in a perenially foggy San Francisco. A murder is soon committed and the culprit tries to frame the war bride who has to fight back – not very effectively so far as she’s just been hit on the head as of the writing of this post.

On the surface it sounds like a very formulaic and somewhat silly plot and that’s where most HIBK critics would stop, and they’d be badly wrong, for HIBK mysteries like their not that distant Golden Age and even hardboiled cousins must not be judged on their premises but on their execution.

HIBK as I have said here several times is to psychological suspense as Homo Erectus is to Homo Sapiens, the missing link between the Victorian sensation novel and the « modern » form that would come to prominence in the post-war years. It cannot thus be expected to be as sophisticated as its successor but it already displays most of its traits and strengths plus some of its own.

What differentiates most HIBK from psychological suspense is its directness. I can see some of my readers frowning here as the average HIBK plot is not exactly straightforward, being often extremely convoluted and above all diluted (remember the genre rose up from the sensation novel’s ashes…) That is not the kind of directness I have in mind. HIBK mysteries are frequently overlong, plodding even, but they are told in an extremely matter-of-fact, no-nonsense fashion that is the genre’s real signature.

The typical HIBK heroine – or hero as there were also a few « male » variants – doesn’t waste their time penning beautiful prose. They have a story to tell, and that’s what they do in the most direct manner possible – and in so doing they frequently break the fourth wall, for the objective is to abolish the separation between the reader and the protagonist. Mary Roberts Rinehart’s prose for instance has an eerily « oral » quality that makes one feel like one is listening to the narrator rather than reading a book, and gives the story an immediacy and urgency absent from more elegantly phrased stories. The language doesn’t stand in the way of the story; the language is the story.

Let’s go back to Mary Collins’ book. The heroine’s bludgeoning comes as the climax of a brief yet tense chapter that sees her fleeing the dark house to do some sleuthing of her own, a chapter that would have made Hitchcock proud. Collins achieves nail-biting tension by making the reader literally follow Hilda (the heroine’s name) as she slowly makes her way out of the sleeping house then wanders in the dark street of a stranger city under a blackout. Nothing much happens but Hilda’s terse yet effective narration keeps the reader on the edge. I was reminded of Cornell Woolrich upon reading it – and there is a lot to be written about the way Woolrich and HIBK writers influenced each others.

In the end HIBK is about narration rather than content, and this is the way it kept its vast readership captive for so long. Everyone loves to be told a story, especially when the storyteller is a good one. It’s time for the genre to be welcomed back into crime fiction’s big tent, not only because of its historical importance but because at its best it was really, really good.