Lawrence Goldtree Blochman’s resume is impressive: he wrote hundreds short stories, a few novels, some screenplays and also did some translating on his « free » time. He was an early president of the MWA and won an Edgar for his short-story collection Diagnosis: Homicide. The only thing that constantly eluded him both in his lifetime and afterwards was public recognition. He never was a household name, a situation that worsened further in the years following his death as his writings went out of print and increasingly hard to find, leading to his being forgotten by everyone but bibliophiles and vintage crime buffs such as your servant. The current vintage crime boom could be a good way to reintroduce him to a wider audience but publishers have so far been unable to locate his estate, if any. Looking by the way things are going, no Blochman revival is likely to happen until his work falls into public domain, which is a long, long time. This is both annoying and unfair as Blochman deserves to be read again and finally admitted in the first rank he was denied his whole life through.

I first become interested in Blochman two decades ago when I read Mike Grost’s glowing study of his work and subsequently bought the French edition of Bombay Mail, at the time the only book of his readily available (and affordable) to a French reader. Alas the copy I received was in such bad a shape that I barely dared to open it and so it happened that I never read Bombay Mail despite his extremely good reputation on both sides of the Atlantic. Luckily I soon found other ways to satisfy my curiosity as Blochman’s short stories were abundantly translated in the years following WW2, regularly gracing the pages of the local editions of EQMM and The Saint Mystery Magazine, the latter of which appearing to be his home spot as he had a story in every issue of so. As I began collecting – and reading – these old magazines I was able to move Blochman from the « potentially interesting » to « very interesting » categories, with at least one story of his, the admirable Red Wine, securing a permanent place in my own pantheon of great short crime writing.

Still, nothing I had previously read had prepared me for the shock that awaited me when I finally got to read one of his novels, Blow Down. It was only three years ago – yes I had taken my time but it was worth the wait. Blow Down had all the trappings of that familiar (and, to me, irresistible) subgenre that is the « exotic » mystery, being set on a Caribbean island in the years before WW2 with picturesque colonials, some Nazi spies, a love story and, of course, a murder. I expected it to be readable, I found it to be brilliant on every level, as it demonstrated something his stories only hinted at: Blochman could write, could tell a story, could do atmosphere and character – in short he was a hell of a writer. Also and perhaps most crucially, he was an adult writer, meaning that he handled his material in a mature way, something that wasn’t that frequent at the time 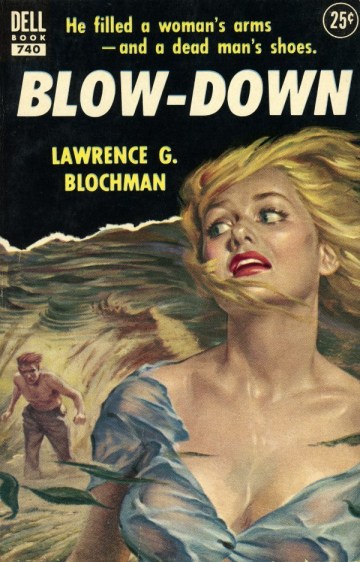 . Blochman doesn’t treat his setting as a gimmick but makes it a character in its own right – a three-dimensional one, as is every other character in the book. The way he brings it to life, making it real and palpable to the reader, makes him one of the great « atmosphere writers » of the American school, along with John Dickson Carr and Mignon G. Eberhart, but in a more nuanced way. Blochman’s art of the nuance is also in full display in the love story which he handles in a very different way from his contemporaries, neither mawkish or played for laughs. Same goes for the « geopolitical » side of the story which Blochman treats seriously, his Nazis being a real threat and not the stock figures of contemporary popular fiction.

I found the same virtues in the next two books I read, Red Snow at Darjeeling and Wives to Burn which is the best Blochman I’ve read so far, being my Book of the Year for 2020. Both are set in India, a country where Blochman spent a long time and which he obviously loved. The vivid way in which he portrays it inevitably makes one think of Kipling but Blochman’s treatment is much more nuanced (again) and at times critical. He never says it explicitly but Blochman doesn’t share his elder’s view of the Raj as something fundamentally good and bound to last forever. The character of the burra in Red Snow, still speaking limited Hindi with a « horrible British accent » despite having lived there for more than thirty years, is eloquent enough and a sharp condamnation of colonialism everywhere. The criticism is more muted in Wives but Blochman goes further in the exploration of the tensions between the British and the locals, including a couple of independentists which, despite being antagonists, are portrayed in a serious way and as a possible, even probable, future for the country.

Another strong feature of Wives to Burn, which it shares with Blow Down, is the strong characterization and especially the love story. Blochman is not really a feminist but neither is he a HIBK writer. The book may end with the « hero » saving the damsel in distress, but Wives can (must?) also be read as the story of the damsel saving the « hero » – from himself. Blochman seems to have seen love as a mutually regenerative force rather than the mere pairing of a handsome man and a pretty girl that it was to his colleagues.

« But what about the plots? » I can see my more plot-driven readers shouting before their screens. Well, they are more than adequate – Wives even has a clever use of the Dying Message clue – but I’d say Blochman’s writing has so much substance that it’s easy losing sight of them. Besides his are not traditional detective stories but rather adventure stories with a mystery element, Blochman being more interested in having the reader turn the pages than engaging in a duel of wits with them – and he more than succeeds in this reader’s case.

All that and many other things – I would need a much longer article to make a list of everything I like about his writing – make it even more puzzling that Blochman’s reputation remained at best that of a second-rank writer despite support from such luminaries as Anthony Boucher. The fact that he favored the short story over the novel at a time when the latter was paramount may be one of the reasons. Whatever may be, I hope to have made a convincing case that he deserved and still deserves much better – if only he could be given a chance. That bloody estate really has to be found.