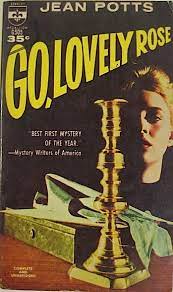 Because of its lack of rules and even of a standard definition, « Suspense », whether you call it psychological or domestic, was a very peculiar genre that was home to some very peculiar writers – and Jean Potts may have been the most peculiar of them all. If Ursula Curtiss as I once said occupied the middle ground between Charlotte Armstrong and Margaret Millar, one might say Potts fell somewhere between Millar and Patricia Highsmith, but her voice and approach to crime fiction were wholly and uniquely hers. This is thus one of the most pleasing consequences of the current vintage crime revival that her work is finally back in the spotlight after decades of near complete oblivion.

« Oblivion » is not too strong a word. She was not the only crime writer of her time to see her reputation wane over time and her books going out of print – such trajectories are the rule rather than the exception if our favourite genre – but unlike most she wasn’t even able to keep even a small following. A leading and otherwise very knowledgeable critic with whom I exchanged some emails in the 2000s admitted to me, in a rather embarrassed fashion, that he had never read any of her books. I myself had read only one – the superb Death of a Stray Cat – but I just couldn’t believe the person responsible for such a book could now be so obscure despite having been an Edgar-winner and a critical darling in her hayday. It took all the dedication of another dismayed reader, blogger J.F. Norris, to finally convince a publisher, the invaluable Stark House Press, to give Potts a chance. I guess they didn’t regret it since they just released a third twofer of hers.

Perhaps one of the reasons for her fall from grace is paradoxically her greatest strength, that is her refusal to compromise. Potts was not a « commercial » writer. Had she been, she would have found and stuck to a formula, have a series character and tried to make nice to the reader by ending her books on a positive note. She never did any of these things. One of the greatest pleasures in reading a book of hers is that you never know what kind of a mystery it will be or what she has in store. It takes quite a range to be able to write both the aforementioned Stray Cat, which is basically a fair-play whodunit, and a radical experiment like The Diehard which puts the very definition of crime fiction to the test.

That alone was enough to make sure Potts would never be a household name (she never was) but she made things even worse with her extremely bleak worldview, which is why I linked her to Patricia Highsmith. Potts unlike her is not fascinated by evil and criminals but both writers share a very pessimistic view of the human nature and condition. Very few of her characters are completely and iredeemably bad but very few are completely and absolutely good either. The Pottsverse is filled with more or less flawed people not happy with their lives and often trapped into relationships that are either unsatisfying or genuinely toxic. Attempts to break free fall flat, or have disastrous consequences. Love is sometimes the cure, but frequently it is not. Murder in Potts’ books is not done by superminds or ruthless psychopaths but by people with no other choice – or so they think. Potts doesn’t judge them but neither is she a loving god. Her eye is an unflinching, laser-like, and cold. She is the anti-Charlotte Armstrong.

And yet her books are compulsively readable. « Suspense » may be too convenient a word to really be meaningul but it certainly applies to her writing. Despite the near absence of likeable characters or any visible criminal plot until the very end, I couldn’t put The Diehard down once I started it. She is also good at keeping you guessing. Like with most writers that seem not to care for plotting, her books are actually intricately woven affairs in which everything falls into place in the end. You may not always like it and wonder why the heck you keep reading, but Jean Potts never wastes your time. Let us hope this round she’s back for good